How to Beat Procrastination

Published by Scientistt Studio on December 05, 2020 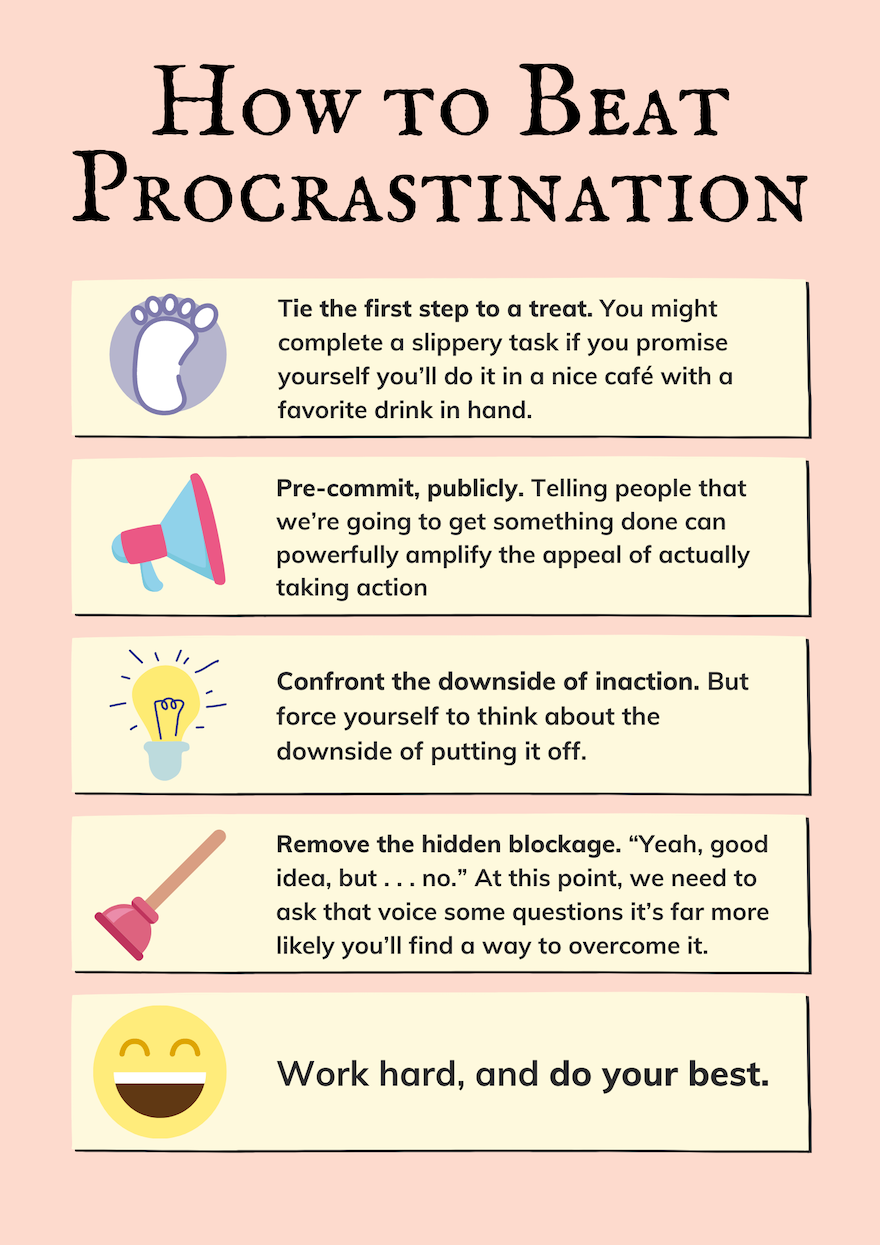 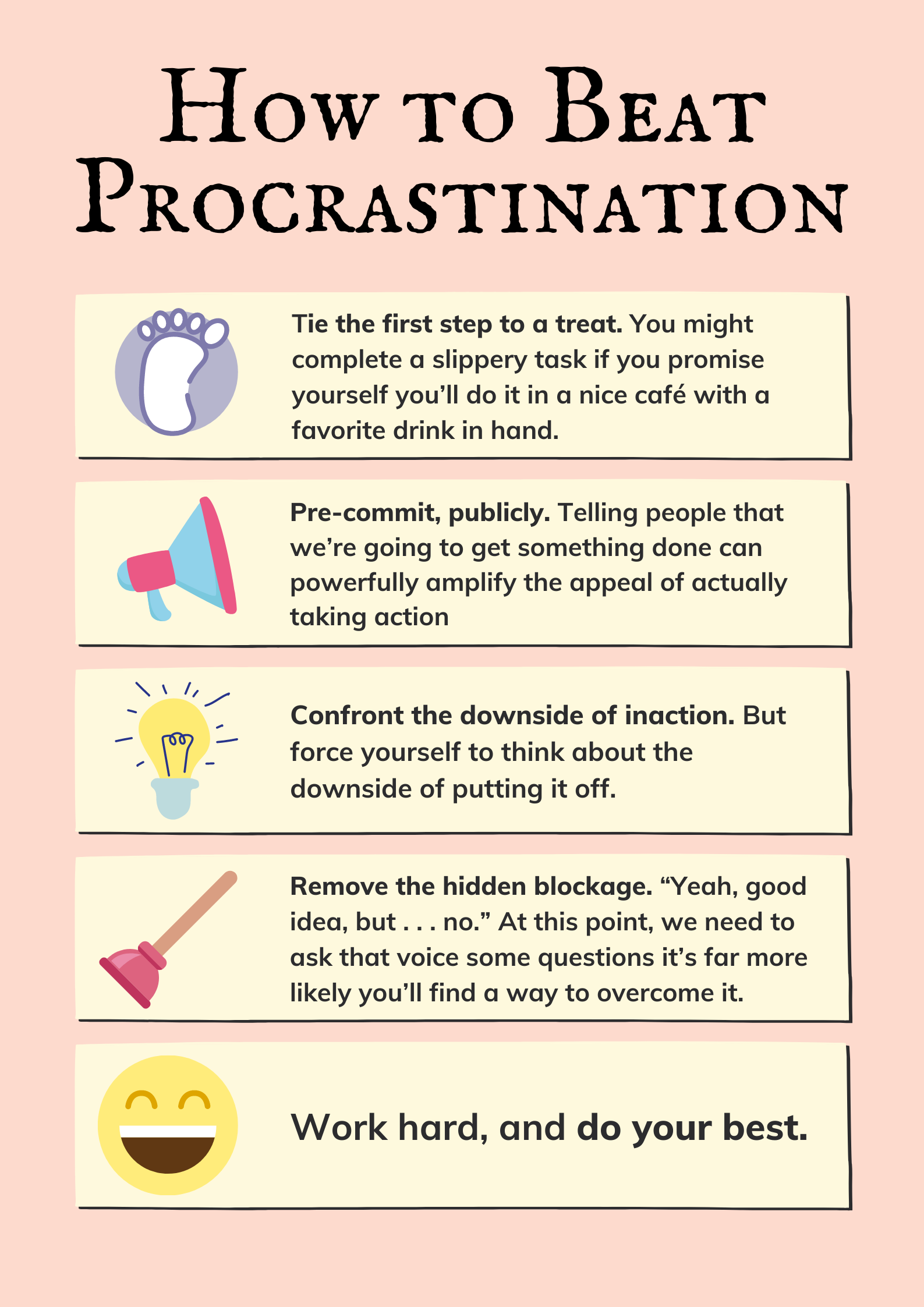 Procrastination comes in many disguises. We might resolve to tackle a task, but find endless reasons to defer it. We might prioritize things we can readily tick off our to-do list—answering emails, say—while leaving the big, complex stuff untouched for another day.

The problem is our brains are programmed to procrastinate. In general, we all tend to struggle with tasks that promise future upside in return for efforts we take now. That’s because it’s easier for our brains to process concrete rather than abstract things, and the immediate hassle is very tangible compared with those unknowable, uncertain future benefits.

How can you become less myopic about your elusive tasks? It’s all about rebalancing the cost-benefit analysis: make the benefits of action feel bigger, and the costs of action feel smaller. The reward for doing a pestering task needs to feel larger than the immediate pain of tackling it.

To make the benefits of action feel bigger and more real:

Visualize how great it will be to get it done.

Researchers have discovered that people are more likely to save for their future retirement if they’re shown digitally aged photographs of themselves. Why? Because it makes their future self feel more real—making the future benefits of saving also feel more weighty. When we apply a lo-fi version of this technique to any task we’ve been avoiding, by taking a moment to paint ourselves a vivid mental picture of the benefits of getting it done, it can sometimes be just enough to get us unstuck. So if there’s a call you’re avoiding or an email you’re putting off, give your brain a helping hand by imagining the virtuous sense of satisfaction you’ll have once it’s done—and perhaps also the look of relief on someone’s face as they get from you what they needed.

Telling people that we’re going to get something done can powerfully amplify the appeal of actually taking action because our brain’s reward system is so highly responsive to our social standing. So by daring to say “I’ll send you the report by the end of the day” we add social benefits to following through on our promise—which can be just enough to nudge us to bite the bullet.

Confront the downside of inaction.

Research has found that we’re strangely averse to properly evaluating the status quo. Known as omission bias, this often leads us to ignore some obvious benefits of getting stuff done. Suppose you’re repeatedly putting off the preparation you need to do for an upcoming meeting. You’re tempted by more exciting tasks, so you tell yourself you can do it tomorrow (or the day after). But force yourself to think about the downside of putting it off, and you realize that tomorrow will be too late to get hold of the input you really need from others prior to the meeting.

To make the costs of action feel smaller:

Sometimes we’re just daunted by the task we’re avoiding. The trick here is to break down big, amorphous tasks into baby steps that don’t feel as effortful. Even better: identify the very smallest first step, something that’s so easy that even your present-biased brain can see that the benefits outweigh the costs of effort.

Tie the first step to a treat.

We can make the cost of effort feel even smaller if we link that small step to something we’re actually looking forward to doing. In other words, tie the task that we’re avoiding to something that we’re not avoiding. For example, you might muster the self-discipline to complete a slippery task if you promise yourself you’ll do it in a nice café with a favourite drink in hand.

Sometimes we find ourselves returning to a task repeatedly, still unwilling to take the first step. We hear a little voice in our head saying, “Yeah, good idea, but . . . no.” At this point, we need to ask that voice some questions, to figure out what’s really making it unappealing to take action. Often, the issue is that a perfectly noble competing commitment is undermining your motivation. Once you’ve made that conflict more explicit, it’s far more likely you’ll find a way to overcome it.

So the next time you find yourself mystified by your inability to get important tasks done, be kind to yourself. Recognize that your brain needs help if it’s going to be less short-sighted. Try taking at least one step to make the benefits of action loom larger, and one to make the costs of action feel smaller. Your languishing to-do list will thank you.